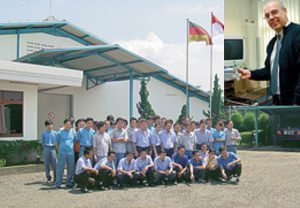 Klöcker Bros. would like to do exactly what is being expected from the domestic companies, considering the economical and political point of view: Developing, investing and expanding at their German site located in a small district of Borken called Weseke. However, the Higher Administrative Court of Münster spoiled the plans of the mechatronical-oriented company.

As an internationally operating company, Klöcker is manufacturing mechatronical components on half-cross, cross motion and full-cross leno basis for dobbies and Jacquard weaving machines. More than 40 staff members are being employed in Weseke at present. Eleven new jobs would have been provided by Klöcker through the extension, six highly qualified workplaces as well as five training positions. Klöcker is now being forced to expand at its Indonesian site instead. “The production being outsourced to Indonesia, which is subject to low production costs, requires plenty of capital”, managing director Dr. Christoph Schwemmlein explains. In general, countries with low production costs are focusing on human labour, whereas capital is requested by the manufacturing sector of industrial states like Germany. “For this reason, it would have been more advanced and reasonable to extend in Germany due to the capital-intensive production manner”, says Mr. Schwemmlein. Exclusively contracting as well as handcraft businesses being located in the district would have had drawn benefit from the enlargement amounting to approximately 5.500 square meters in terms of new work orders.

The verdict of the Higher Administrative Court is available since the beginning of April. The company Klöcker Bros. is not allowed to expand at the German site in Borken-Weseke. Reason: The court did not accept the development scheme having been worked out by the City Council of Borken. A next-door neighbour of the company had taken legal action since he wanted to make constructional use of a part of his property. He has not been successful with his claim, however, the neighbour had an ace up his sleeve. “When he noticed that his claim wouldn’t work, he opened a procedure in order to check whether the legal norms applied”, Mr. Schwemmlein explains. As a result, the development scheme is now being re-arranged completely once again.

The Higher Administrative Court quoted as a reason for Klöcker not getting building permission that one of the two spare areas left could potentially be used for setting up a retail trade, e.g. a department store. Mr. Schwemmlein knows that “by now means, the City Council of Borken would authorize this kind of project.” However, the development scheme was not subject to a corresponding arrangement excluding such a use. Merely the word potentially has been sufficient for the court to turn down the development scheme.

“We don’t have time”

The court hinted at the fact that a new scheme would solve the problem, however, this takes a lot of time Klöcker doesn’t have. “We have been waiting for six years to start with the construction of the two new production halls”, Mr. Schwemmlein explains. “Eight further months will be gone by until a new development scheme is passed by the City Council of Borken”, says the managing director. He refers to an analogy, “the Technical Inspection Agency will only check the defective exhaust pipe if due to this part, the car would have failed the MOT, whereas every detail of the development scheme will be verified once again.”

Furthermore, a procedure to check whether the legal norms apply could then be opened again within a period of one year. “In this case, the neighbour would probably wait until the last day prior to the deadline once again”, Mr. Schwemmlein states embittered. Another two years would be wasted until another decision was made by the Higher Administrative Court. “We are simply not able to afford waiting for such a long time”, says the frustrated manager. “After all, our ability to supply has to remain ensured. We have to fulfil orders.”

Mr. Schwemmlein is particularly disappointed about the fact that the eleven jobs cannot be created as anticipated. “The hopes of young people trying to get a job have been dashed by the judgment, that’s something to be really sorry for.” Klöcker will now be forced to extend the Bandung location (Indonesia) by 2000 square meters and will create six new jobs there.