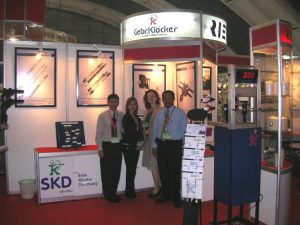 Klöcker currently attends the Bandungtex in Indonesia. 500 participants coming from 27 countries exhibit textile machinery as well as accessories on a surface of about 20.000 m², a press release of the company states.

Since Klöcker runs an own production in Indonesia, this exhibition plays a crucial role. The weak US-dollar as well as the remaining legal uncertainty regarding the German site’s enlargement make it even more important. According to the company’s press release, the Indonesian location considerably boomed during the last years. As a result, about 100 people instead of 25 as initially planned are employed there. Klöcker attends the show with both German and Indonesian staff.