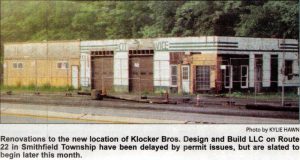 Progress on the new location of Klocker Bros. Design and Build LLC along Route 22 in Smithfield Township has been slowed due to some permitting issues, but township and company officials hope the project will be moving along soon.

Klocker Bros. Design and Build LLC operations manager Jobe Glenny had hoped to be operating from the new location by the end of April, but hit some bumps in the road.

Smithfield Township code enforcement/zoning officer Stanley Gresko outlined some of the issues that have delayed the repurposing of the former Chet Grove’s Cars Unlimited building.

“The major issue was the existing septic system,” said Gresko. “It was a holding tank and was never hooked up to the city sewer. The previous owner intended to put a car wash in, but with the amount of water that would go into the system, it had to be hooked into the city sewer by putting a directional boring under Route 22. It would have been relatively costly to do that.”

When Klocker Bros. Design and Build LLC purchased the building, Gresko said Glenny inquired about how to keep the holding tank.

“It would be for limited use since there would only be a few office spaces, so they thought the existing tank could work,” said Gresko. “Our sewer officer established how many gallons per day it would hold, and it needs to be pumped out on a regular basis.”

The tank will have a warning device attached that indicates if it needs to be pumped, and Gresko said schedules will need to be set up to pump it out on a regular basis. This has been officially approved by the sewage enforcement officer.

The other issue deals with PennDOT and the entrance and exit to the property from Route 22. “They need a highway occupancy permit from PennDOT, and they’re in the process of establishing where you come off the road,” said Gresko. Establishing how to enter and exit the property has been somewhat difficult. “If you come from Route 22 east, it’s easier to get into,” said Gresko. “For people coming west, there’s a division in the highway that people can’t cross, so you have to get easements. I’m not sure where PennDOT is on that one, but (it seems) the thing you would need to do is almost do a U-turn.”

Gresko said the township is working with Glenny to get things going so renovations can begin. “Everyone is hoping (the business can open) soon,” said Gresko. “We don’t want to drag it out, and it’s been inconvenient. The township is glad something is going in there, so we’re trying everything we can to help. (Glenny) is going in the right direction, it’s just a matter of getting others to agree to what he wants to do.”

According to Glenny, he hopes to get started with the project by the end of June. The engineering plans for the new facility are currently under review with the Huntingdon County Planning Commission.