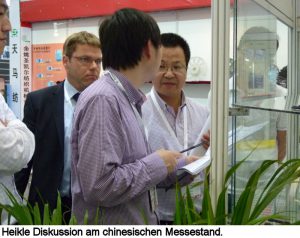 WESEKE. On the occasion of the fair Shanghaitex in China and considering the ongoing fight against product piracy, the company Klöcker Bros. again appeals to purchasers throughout industry and trade to go for original products.

Apart from the major European customers, the Chinese manufacturer of weaving machines China Textile Machinery (CTM) was an excellent example on the fair as well by taking the offensive through marketing the Klöcker Propeller Leno having been installed on the local exhibits.

The dark side of the show, however, was demonstrated by several dubious traders mostly having used the event as a platform for selling illegally pirated copies and hence increasingly maneuver themselves into the focus of patent-related observation.

Nevertheless, Klöcker Bros. were able to stop the sales of pirated versions of the patented K-MAG Leno Heald at the show extensively and with great public appeal under supervision of an attorney. The cabinets of a Chinese bulk distributor had to be cleared.

The local Klöcker staff was not intimidated by the vehement resistance also on pain of physical violence. According to a press release, “Klöcker Bros. will rather continue to intrepidly take action in the fight against the illegal business practice of product pirates also in the future”.

Klöcker is a producer of mechatronical components for weaving and tool technologies.