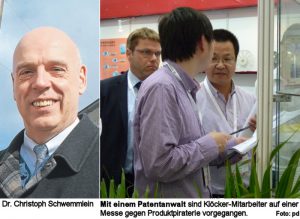 WESEKE. Asia has become an important market for German engineering companies. And Asia, this means especially China being about to set the pace throughout worldwide economy. An inviting, however, extremely difficult market – not least due to patent protection being, to put it mildly, taken easy in China.

Klöcker Bros. regularly experience such situation at fairs in China, such as the recent “Shanghaitex” being a major exhibition for textile industry in Shanghai. Apart from exhibitors from all over the world, many “dubious traders”, to use the words of the company from Weseke, may be found as well who unabashedly offer illegally copied products.

So far, it has been difficult to take any related action. “Those traders surely know that they are selling copied goods”, Klöcker manager Dr. Christoph Schwemmlein states, “but they also knew it would take weeks or months to take patent-related legal action. The fair would have been long over.” This time, the situation was different.

For the fair had provided a patent attorney who could be consulted by the foreign exhibitors. Having done so, Klöcker now achieved that a Chinese bulk distributor had to clear his cabinets showing copies being subject to control technology from Weseke. A great success, but still, a proverbial drop in the ocean.

“We are facing damages running into seven-digit amounts per year”, Schwemmlein says. A permanent affront, which is why he characterizes the possibility of directly consulting a patent attorney at a fair in China to be an “achievement” after all. Taking action against product piracy was “expensive”, the manager says, but he would not just sit back and watch.

This corresponds exactly to the recommendation of the Chamber of Industry and Commerce. “Product piracy especially in China is a huge issue throughout sectors”, Bodo Risch says, being the person in charge of international business at the regional Chamber of Industry and Commerce “IHK Nord Westfalen”. From a legal point of view, such cases are mostly “extremely difficult”, but: “I advise companies to swallow the bitter pill and to take action, simply to at least protect the own name and to bare teeth.”

Any business would be affected according to Risch. “In China, copying has never been considered negatively basing on cultural history”, he explains, “imitating forms an essential part of learning.” This would be the reason for a broad lack of understanding about such act being unlawful. Christoph Schwemmlein knows about it: “We are often told to be happy about our products being copied, as only good things are worthy of imitation.”

Bodo Risch therefore strongly recommends utmost caution to local companies. “It is assumed that any company employing more than 100 people has been target of a hacker attack from China already”, he says. For this reason, companies should begin to improve protection of their products inside the own premises, “this is being extremely neglected in many cases”. Regarding business in China, the Chamber of Industry and Commerce in Shanghai moreover offered an own site rendering support in case of any questions.

Surely not in any case. Schwemmlein reports about his employees having been repeatedly threatened by shaking fists. “This”, the manager says, “is a completely new quality.”