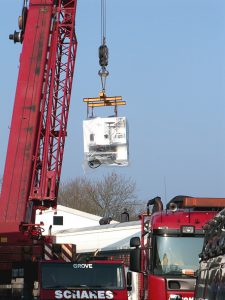 Borken-Weseke (kre). Klöcker Bros. have just received a new Hermle machining center with five axes and a total weight of more than ten tons. A truck-mounted crane which weighs 80 tons with additional counter weights of 60 tons and an extension arm of 35 meters were necessary to balance the colossus into the opened roof of the production hall. This machine amounting to 500.000 Euro now concludes the investments into the tool construction and design division for the time being, a press release of the company says.

According to Klöcker, the Borkeners invested nearly half a million Euro exclusively in machines and automatic control engineering during the last three months. Another six-digit amount was raised for reconstructing measures, foundations, crabs and climate control.

The machining center primarily comes into play when treating materials which are frequently used in the tool construction but hard to cut. A basic accuracy in the positioning tolerance of 0,008 millimeters is a matter of course. Klöcker Bros. from now on offer their know-how in tool construction and design to other companies as an external service.