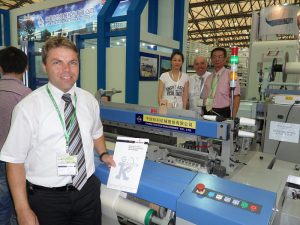 The fair Shanghaitex has been affected by the present perception of economic unsteadiness throughout worldwide textile machinery industry. In Asia and especially in China, problems regarding national debts are limited, yet inflation going along with increasing interest rates is causing worries. Monetary turbulences certainly contribute to the situation as well, according to a press release of Klöcker Bros.

Nevertheless, almost 1.000 exhibitors from 18 countries have presented their products on 90.000 square meters, while an interesting trend reversal can be observed in China as well. So far, performance improvements and output have always been the basis of nearly every purchasing decision, whereas the discussion turned to focussing on energy efficiency during the show.

The Klöcker and SKD production program has been taking account of these issues for a long time already, thus the local team coming from Germany, Taiwan and Indonesia was glad to note that CTM as a Chinese manufacturer of weaving machines producing about 1.000 machines per year now makes use of mechatronical components made in Borken.

Thus, Klöcker is able to expand and strengthen the OEM market position for all internationally oriented manufacturers of weaving machines especially in Asia.