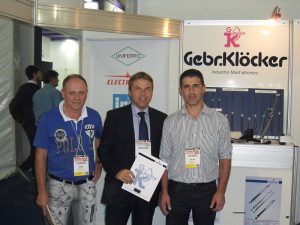 Weseke. In cooperation with the Brazilian agent Uniferro Ltda. located in São Paolo, Klöcker Bros. from Weseke are participating at present in the trade fair Febratex in Blumenau. According to a press release, the trade show taking place every two years has become well-known as specialized fair for the national textile markets during the past years.

At a common booth within the fully occupied area being subject to a total size of 24.000 square meters, visitors especially coming from southern Brazil are being illustrated both the Klöcker and SKD product lines within the scope of individual interviews, the company from Weseke explains in a report.

During this ambitious year of trade fairs, the company located in Weseke again focuses on active customer service in order to successfully strengthen the market position in an environment being strongly affected by aggressive price competition from Asia. This way, Klöcker Bros. hope to be able to send positive signals in spite of ongoing crisis-related effects.