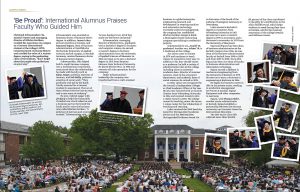 21 June 2015: ‘Be Proud’: International Alumnus Praises Faculty Who Guided Him

Christoph Schwemmlein ’84, Juniata Trustee and managing director of Klöcker Brothers, recalled his experience on campus as a German international student at the College’s 137th Commencement ceremony May 16 and extolled the value of a Juniata degree, saying to the graduating class of 343 students, “don’t forget about the people who guided you on your way.”

Schwemmlein, who helped build a small German company into a multinational corporation, reminisced about the relationships he made with faculty such as Klaus Jaeger, professor emeritus of German, and Bob Reilly, professor emeritus of social work: “They positively took me by the hand. Totally unusual for a German student (to experience). The two of them always took the time (to teach me) a new sense of studying.”

He also credited Jaeger with pledging to help him financially if misfortune struck when he and a business partner borrowed the funds used to start the business now called Klöcker Brothers. “A professor of German and a former student,” Schwemmlein said. “Across-borders trust. All of this made me feel brave and proud.”

Under Schwemmlein’s leadership the company was transformed from a craft-oriented business to a global enterprise emphasizing research and development in weaving machine and automotive technology. Currently under his management, the company has established Klöcker Brothers Design & Build, a Huntingdon-based contracting company specializing in residential projects. Schwemmlein’s son, Arnold ’15, graduated. Another son, Achim ’18, is a freshman at the College.

Jim Lakso came to Juniata in 1970 and continues to teach classes in economics every year. In addition to his four-decade career as a professor, he held a variety of administrative roles at the college, including stints as assistant academic dean, director of summer sessions, chair of the economics department, and academic dean of social sciences. He retired in 2013.

In 2012, Lakso was recognized by the Council of Independent Colleges as Chief Academic Officer of the Year. He also was honored with an Alumni Citation from Wittenberg University in 2014 and received Juniata’s John C. Baker Award in 2013. The College named its teaching center the James J. Lakso Center for the Scholarship of Teaching and Learning.

Figura earned a diploma in mechanical engineering from the University of Bochum in 1979. He went on to earn a doctorate in engineering at Bochum in 1984. He began his business career in 1984 in the private sector, working in production management for Procter & Gamble, Digital Equipment and other companies in Germany. Figura, with Thomas Siebe, another senior administrator at Bocholt, helped establish a partnership between the German university and Juniata’s Center for International Education.

The 2015 Senior Class Gift collected more than $ 51,000 (81 percent of the class contributed to the gift), for contributions to the Alicia Griffith Fund, which helps students in need during their time at Juniata, and for the eventual renovation of the College’s Health and Wellness Center.