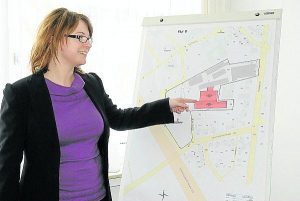 22 January 2010: Paving the way for the next generation

Weseke. “The mechatronical machine construction sector has bottomed out. However, it’ll take about three to four years until we reach the former level of 2007 again” Dr. Schwemmlein, one of the managing directors at Klöcker Bros., explains the current economic situation. Granted, this does not necessarily cause euphoria, but it will not hinder Klöcker to ultimately get the enlargement plans started which were put on hold for eight years either.

The global players, having their seeds close to the church as a small handicraft business, broke ground in November already and kicked off their project which is divided into four constructional phases. In 1947, Klöcker moved from the village’s center to the new site between Hauptstraße and “Im Thomas”. Back then, two halls were constructed. Today, hall number 4 with a connecting passage to hall number 6 is being remodeled. Thus, Klöcker Bros. create another 350 square meters of production area. Hall number 7 will be taken care of in phase 4. “We don’t know exactly when we’ll start this phase”, Schwemmlein says and underlines that Klöcker Bros. realizes the project “without any subsidies”.

It is Klöcker’s goal to secure 40 jobs in Weseke by enlarging the area for production. There won’t be additional jobs in the short run, Schwemmlein explains. Nevertheless: “We have two working students, three trainees and one student in a dual apprenticeship. We need to offer them a perspective as well.”

Klöcker Bros. once started with handmade weaving shuttles – today they produce high-tech modules for weaving machines and high-quality items for the worldwide automotive and construction sector. 90 percent of the products are exported. “We are available wherever we are needed” Schwemmlein replies to the question where Klöcker products may be found.

In Weseke, specialists take care of research and development. “We will frame our 111th patent soon” Schwemmlein proudly informs. Costly jobs were moved to Bandung (Indonesia) a couple of years ago. “Everybody who wants to stay competitive needs to control the unit labor costs.”

Moreover, the company presently plans to open up another branch in the United States. And while this project is becoming more tangible, the enlargement works will be continued as soon as ground freezing is over. In a first step, the area was enclosed, the outlines of the trucks’ area for maneuvers and overnight stays are already visible. Those installations which are necessary for the access route from the new street “Im Thomas” are finished, cable channels and utility shafts are ready.

When the sudden winter stopped the enlargement outside, the workers continued beneath the roof of hall number 4. The connecting passage to hall 6 which offers enough space for four new high-performance machines is already visible. Depending on the weather conditions, Dr. Schwemmlein is confident that Klöcker now will proceed quickly and “pave the way for the next generation”.