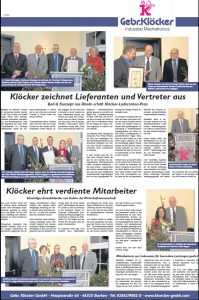 Borken. Recently, Klöcker again has honoured the most efficient sales partners, suppliers and service providers in the celebratory atmosphere of the renovated Autohof. After the managing director, Dr. Christoph Schwemmlein, had welcomed the guests, this year’s Klöcker award for the most efficient supplier was presented to the company Bad & Konzept Grunden & Föcker GmbH being located in Rhede.

Managing director Alfons Grunden proudly received the price of the company Klöcker handed over by plant manager Mr. Michael Leifeld, who emphasized during his laudatory speech Grunden & Föcker to be an always reliable partner and complimented not only the competent team of Alfons Grunden as well as the good price-performance ratio of the company, but also Mr. Grunden’s personal commitment in particular. Not only this year, which had been marked by comprehensive reconstruction measurements, but since the very beginning of the business relationship in 1998, the company Bad & Konzept from Rhede always had taken account of the interests of Klöcker Bros. in an exemplary way according to Mr. Leifeld.

Furthermore, management assistant Mrs. Marion Terhart had the honour of awarding the present delegation of the company Louis P. Batson from Greenville, South Carolina/USA with this year’s price for the most efficient sales partner.

Mrs. Terhart emphasized during her speech when defining the most efficient sales partner, besides measurable merits – such as turnover –, special qualities had been considered being important to a successful cooperation and necessary to efficiently serve today’s markets.

Thus, Batson always had been not only a true and loyal partner to Klöcker Bros., but also distinguishes from others at any time through utmost support in legal questions. Whenever other business partners raised their hands in defense going through legal issues related to trademarks, it had been Batson who never left Klöcker’s side when fighting for valid patents. After all, this would be the basis for real partnership, Mrs. Terhart explained in her laudatory speech.

Batson’s president Mrs. Caroline Batson Stewart as well as her father Elliott Batson, both of them visibly proud and touched, took the opportunity of expressing their highest gratitude to Klöcker Bros. while referring to the relation being based on a partnership between the two companies having been existent for many decades.

Finally, the subsidiary Gebr. Klöcker Versicherungsmakler GmbH (Klöcker Insurance Brokers) honoured a company with a price for the most efficient service provider for the first time.

Mr. Steverding was especially grateful for the flexible service and the innovative and adequate support in a market getting increasingly difficult through ruinous competition and expressed this kind of support would hardly be found anymore today.

Klöcker Bros. were pleased to welcome a former apprentice during the course of the ceremony as well, having completed his apprenticeship as industrial clerk at Klöcker from 1997 to 1999.

During her laudatory speech, management assistant Mrs. Manuela Tenbeitel especially honoured the personal commitment of the former apprentice Holger Amshoff, who had to work hard during his apprenticeship of two years because he always had been given a run for his money.

After having completed his commercial training, Mr. Amshoff started his studies at Juniata College in Huntingdon, Pennsylvania/USA and graduated as a Bachelor. The College with its 1.500 students from 40 countries ranks among the best in the United States. Dr. Christoph Schwemmlein as board member of the university conveyed the congratulations in the name of both the president Dr. Tom Kepple and the provost Prof. Dr. James Lakso.

Mr. Amshoff passed his diploma as graduate economist at the Ruhr University Bochum in December 2004, where he concentrated on his work as economical assistant subsequently.

Recently, Mr. Amshoff has completed his dissertation in order to acquire the Doctorate of Economics at the Ruhr University in Bochum and therefore now could be honoured by Klöcker as Dr. Holger Amshoff.

For many decades, Klöcker has been offering vocational training for both commercial as well as technical job profiles and recently has been honoured by the local Industrial Chamber of Industry and Commerce as such company offering trainings, after Mr. Bastian Wittkowski had completed his apprenticeship within the scope of a dual degree program to be “Business Economist – Bachelor of Arts” with excellent results.

Klöcker is happy about these great achievements.

Finally, the managing directors of the production plant of Klöcker in Bandung/Indonesia paid tribute to the special commitment of Mrs. Dra. Litna Tarigan leading the commercial administration locally.

Thus, Mr. Schwemmlein especially honoured the personal commitment of Mrs. Dra. Tarigan, not only having professionally supported Klöcker in general and its subsidiary SKD in Indonesia since the beginning of her function at SKD, but who also always had been willing to campaign for the concerns of the company in a remarkable way. Particularly during the past months of the restructuring phase in Indonesia, she always had been a reliable partner in outstanding demanding situations.

Mrs. Dra. Litna Tarigan was surprised, but simultaneously very happy about the honouring of her performance. According to Dr. Schwemmlein’s speech, during these times a commitment of such kind could not be taken for granted at all anymore.