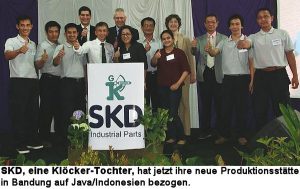 WESEKE (pd/era). The subsidiary of Klöcker, PT. SKD from Indonesia, moved into its new site according to a recent notification of the headoffice Klöcker Bros. from Weseke. The production programme had been extended at SKD. Numerous international guests had followed the official invitation for joining the celebratory opening and presentation of the new site located at the industrial area Bandung BizPark, Java. Many guests had congratulated the typical Indonesian way, the notification continues. This would have been expressed by flower arrangements placed at the entrance area on site.

During the laudatory speech of Klöcker Bros., Management Assistant Manuela Tenbeitel first of all referred to the history and the development of the company SKD having been operative in Indonesia for almost 20 years and having developed in the course of the years from a pure manufacturer of weaving shuttles to an efficient production plant in the fields automotive, textile as well as air conditioning technology.

The guests had the opportunity to view the production area, the notification continues. Isye Gunawan, President Director of PT. Agansa Primatama, referred to the long-standing and good cooperation between the companies Agansa from Indonesia, Klöcker Bros. from Germany and Dihshiang from Taiwan during her laudatory speech. Agansa was pleased of the positive development of SKD in Indonesia and looking forward to continuing both, the well-directed and successful collaboration as well as further growth.

In the future, the company in Indonesia would increasingly focus on tool design and moulding technology. Also, selected components for textile industry will still remain part of the production programme, the press release continues.