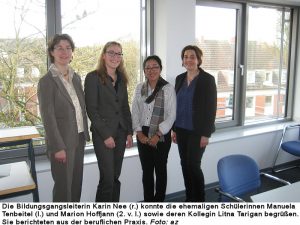 Former students report at the “Oswald” on their professional development

Coesfeld. A relation to practice is indispensable at the vocational college “Oswald-von-Nell-Breuning” in Coesfeld. For this reason, representatives of companies regularly visit the classes in order to deliver an insight into their vocational life and to inform the full-time students about career opportunities and requirements on young professionals.

Thus, Mrs. Marion Hoffjann and Mrs. Manuela Tenbeitel, both management assistants of the company Klöcker Bros. in Borken, recently returned to their former school. The certified commercial assistants for foreign languages reported in English together with Mrs. Litna Tarigan, a representative of Klöcker’s Indonesian subsidiary, on the company and especially on their career.

In this context, Hoffjann welcomed the good preparation for business by practice-related and well-founded education of foreign languages at the vocational college “Oswald-von-Nell-Breuning”. Furthermore, she emphasized the qualification for universities of applied sciences which she had acquired during her educational formation and having been an ideal start for her academic studies meanwhile completed by a Master’s degree majoring in business administration.

Afterwards, the three guests responded in detail to the plenty of advices of the students and underlined many different possibilities a formation as commercial assistant at the European school in Coesfeld would offer, while especially the vocational knowledge of foreign languages would be of particular importance to international companies.

They indicated that young professionals indeed would acquire the necessary commercial knowledge in a relatively short time, however, gaining well-founded knowledge of foreign languages along with would be difficult on the other hand. In this context, they clarified, good English skills to be seen as essential condition, while one should have good command of at least one further language.

Everyone being interested in a formation to be commercial assistant for foreign languages or any other form of full-time studies at the “Oswald”, may obtain individual consultation on Monday (February 2nd, 2015) from 5 to 7 p.m. . | www.das-oswald.de