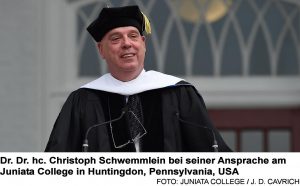 WESEKE. An honorary degree of „Humane Letters“ now was received by Dr. Christoph Schwemmlein, managing director of the engineering company Klöcker Bros. from Weseke, within the scope of the commencement at Juniata College in Huntingdon, USA.

Dr. Christoph Schwemmlein accompanied the celebration as a speaker. He talked about his personal experiences and impressions as young student – especially on the day of his own graduation at Juniata College in 1984. Thus, he reminded the young degree holders to be “proud of their achievements, but not to forget about the people who guided them on their way”.