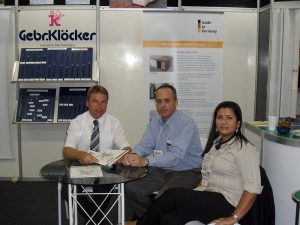 Fortaleza/Weseke (pd/era). In cooperation with the Brasilian agency Uniferro Ltda. from São Paulo, the company Klöcker Bros. from Weseke attended the international exhibition “Maquintex” in Fortaleza, Brasil. The event considered to be the biggest fair for textile machinery and accessories in the northeast of Brasil.

According to a press release of the company, the fair was characterized by the fully booked exhibition space as well as the high attendance by many visitors every day. At the common booth, the product lines of both Klöcker and SKD were presented to the Brasilian trade visitors.

In this context, Klöcker was particularly glad to notice an increasing interest for special mechatronical components for the niche markets gaining more and more importance, the press release continues. Locally, an increased demand especially in view of the Klöcker Propeller Leno could be noted. Klöcker wants to continue extending its market position in Brazil.