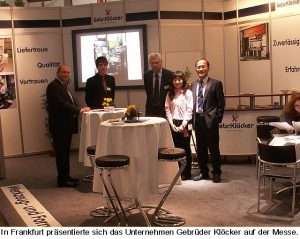 In spite of the alternative fairs AsiaMold in Guangzhou, RoseMold in Moscow and DieMold in Bangalore, the EuroMold in Frankfurt retains its key event status in the trade fair industry of moldmaking and tooling even considering the demanding economical situation. For this reason, the company Klöcker from Weseke presented its engineering and mechatronic sections there recently.

The show’s slogan ”From Design to Prototyping to Series Production” attracted a surprisingly high number of Asian exhibitors as well as visitors according to a press release and impressively pointed out to which extent the development of a serial part grows to be a globally shared process, the press release says.

However, the challenging economical circumstances had to be met as reflected by the reduced amount of incoming orders from home and abroad.

Nevertheless, according to their statement Klöcker was acquainted with promising and future-oriented development projects particularly from the automotive, aircraft and medical sectors realization of which, on the other hand, requires a short-term accomplishment of the enlargement investments in Borken planned long ago that temporarily have been interrupted legally.