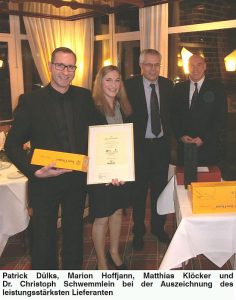 Borken. Within the celebratory scope of the hotel-restaurant ”Am Erzengel” in Bocholt, Germany, the company Gebr. Klöcker GmbH from Borken again paid tribute to special merits, while international visitors were participating in the event at the beginning of the year. After the general manager Dr. Christoph Schwemmlein had welcomed the guests, this year’s Klöcker supplier award has been granted to the company GAP.TEL Telekommunikation GmbH from Borken.

Mr. Patrick Dülks was very pleased about the award having been handed over by Management Assistant Mrs. Marion Hoffjann.

During her laudation, Mrs. Hoffjann emphasised among other things on the reliability and the above-average commitment of Mr. Dülks and his team having been attending Klöcker Bros. already for many years in terms of mobile service in cooperation with Vodafone. With regard to a plenty of Klöcker’s assignments being carried out abroad, this would be quite a tricky job sometimes, even if not directly evident to the respective user, Mrs. Hoffjann explained during her speech.

On behalf of the complete team of the company GAP.TEL Telekommunikation GmbH, Mr. Dülks received the award of the most efficient supplier with thanks.

Klöcker Bros. are pleased about such nice record of success and especially about the long-term solidarity of business partners. The mutual confidence has always contributed fundamentally to a lasting successful positioning of the company among the international markets.