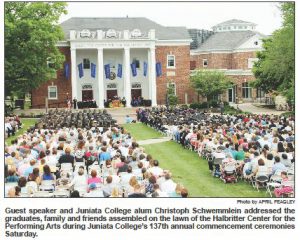 Family and friends from around the world gathered on the lawn of the Halbritter Center for the Performing Arts Saturday for Juniata College’s 137th annual commencement.

“Today’s celebration is truly a collective celebration”, Juniata College president James Troha said as he welcomed the day’s guests. “It is a recognition of a job well done by so many people – teachers, pastors, friends and family, in particular all of those moms and dads out here.

“Our class represents the many unique characteristics that define the Juniata experience and each of them personify one of my favorite expressions ‘With knowledge, comes responsibility’’’, Troha said. “As you exit campus today and embark on your next journey, that responsibility should be a joyous, privileged burden. As Juniata alumnus, you are representing all that is good about this institution and the outstanding faculty who have taught and mentored you, the staff who have supported and challenged you and the students who have come before you as well as those who will follow. Ultimately, though, you are representing yourselves on your own stage.”

Troha introduced Class of 2015 president Christine Sumner Dublin, Ohio, who shared an anecdote from her college career as well as words advice.

Sumner quoted essayist and poet Ralph Waldo Emerson who said, “Don’t be too timid and squeamish about your actions. All life is an experiment.” “Use that experiment to try something new,” Sumner said. “And, after seizing opportunities and trying new things, remember the place that made you what you are today – the community that is Juniata which has been your home for the past four years.”

Honorary degrees were conferred upon three men, all of whom were recognized for their outstanding contributions to Juniata College.

Recipient Raymond Figura of Bocholt, Germany, dean of business administration at Westfälische Hochschule (University of Applied Sciences), was recognized for his collaborative work to develop a five-year program to allow students to receive a bachelor’s degree from Juniata college and a German master’s degree.

Recently retired Juniata College provost James Lakso received an honorary degree and as honored for his many years of work and outstanding support given of behalf of Juniata College. Lakso began at the college as an instructor in 1970, working in various positions over the years, including the 15 years he served as provost until his retirement in 2013.

“Today’s commencement speaker will deliver his address on the same stage where he received his degree only a few decades ago,” said Troha as he introduced Schwemmlein. “He will do so on a day his son, Arnold, also walks across this stage to receive his Juniata degree. It’s a special moment indeed.”

Schwemmlein shared his recollections of his own graduation day, a morning he recalled as “brutally hot.” “I received my degree and I was so proud. Maybe too proud, as Professor Lakso declared quote straightforwardly afterward in the presence of my mum, ‘Christoph, don’t take yourself too seriously,’’’ he said.

When his mother who spoke no English, asked her son for a translation, Schwemmlein altered the words a bit and told her Lakso has said, “Christoph worked very seriously.”

He arrived at Juniata as an exchange student from Münster and experienced some difficulties adjusting. Schwemmlein would likely have returned home after his first term had it not been for a conversation with Klaus Jaeger, who was then a professor of German at the college. Jaeger would become the young man’s close friend and mentor throughout the years that followed.

“I have been visiting the USA on a regular basis for 30 years now, both occupationally and as a trustee”, Schwemmlein said before he conveyed his last words of wisdom for the outgoing Class of 2015. “Study hard – party hard. This used to be our slogan and I can’t imagine any significant changes have occurred in the meantime.”

At the close of the ceremony, graduate Kylie Berrena of Petersburg led those assembled in the first verse of the college’s alma later. “It is my deepest hope that you will find the success that is yours in a way in which you and those around you will be proud,” said Troha. “Most importantly, when you find that success, appreciate that success by saying thank you to those who made that achievement possible.”