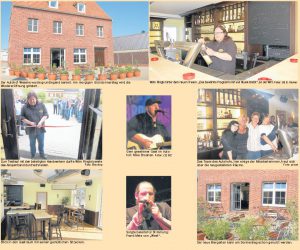 Weseke. The guests could hardly wait it any longer: They had to do without their famous inn for six weeks. Finally, it is accomplished: “Autohof“ in Weseke will reopen its doors on tomorrow’s Holy Thursday. And shines in a new splendour.

Since Ash Wednesday, the workmen had been in authority. Under the direction of Mr. Alfons Grunden and in cooperation with the architect and graduate engineer Mr. Joachim Leson the famous music and ale house was efficiently renovated and reconstructed.

What is typical for buildings from the postwar period: Sometimes disagreeable surprises are being hold. Tenant and innkeeper Wilm Ringle remembers: “When removing the old floortiles we recognized that a large area of the flooring had burst. Thus, complete renewal! The foundation of the bar was deadbeat, consequently a new one had to be provided. The complete heating and aquifer systems as well as electronical installations had to be replaced. The windows had been exchanged and a direct entrance to the new beer garden in front of the inn had been established. Generally speaking, the whole building had been gutted and remade newly.”

The result is presentable: light and friendly colours in beige and brown provide flair. The new bar is a real gem. The flooring is subject to most beautiful timber floor boards. The inn got a new air conditioning. Even the old gallery which always served as stage for the bands had been remade carefully. An important renewal are the modern restrooms which have been completely relocated and are now accomodated in the back of the inn.

Considering the enormous pensum the handicraft enterprises had to manage, Wilm Ringle is still impressed. “Without Alfons Grunden, having attended the whole of measures as the construction manager and the great dedication of his employees as well as the other workmen in charge, the renovation would not have been possible in such short time”, the inn keeper commends.

Even though the ambiance has changed, Ringle retains the established concept of the music and ale house. “Where would you find any inn just providing a glass of beer nowadays?”, the Weseker asks rhetorically. Least of all, the inn keeper wants to do without live music. “We will continue to be a venue for the alternative music scene in Weseke and surroundings“, Ringle said, being happy to present the freshly renovated inn to the long lasting guests, regular’s tables and clubs starting from Thursday.

“Come, watch, have a beer”, that is the opening’s slogan program starting at 6 p.m. Until then, the new beer garden in front of the building will be finished as well. In the summermonths stepping in will be possible as from 4 p.m., on weekends already as from 3 p.m. Chatting, having beer and cocktails, playing darts, meeting friends – this is what the new Autohof stands for. Soccer fans will still be able to watch the Sky TV program.

However, top priority is subject to cultural commitment. Live music acts are planned to be performed once a month. Rock and Blues are focussed, however, one is also open-minded towards other genres, Ringle said. The “rocknight” in Weseke being a highlight in the local calendar will be continued as well. “We want to continue setting cultural accents in the local scene“, Wilm Ringle mentions. He can also imagine regular cabaret evenings in the long run. “Anyone who wants to present his or her talent should just contact me”, the Weseker states.