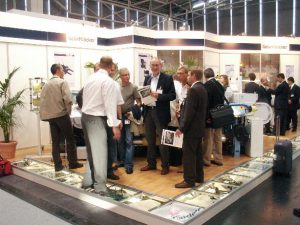 21 September 2007: Fastest machine of the exhibition

Weseke / Munich (pd). On a surface of about 180.000 m², almost 1.500 exhibitors from 38 countries recently exhibited their latest machines and innovations with respect to the textile industry. According to a press release of Klöcker Bros. having been present with an own booth, more than 100.000 specialist visitors from allover the world were expected to join the textile show ITMA 2007. The exhibition which takes place every four years thus impressively underlined its leading status as the most important exhibition for textile machinery in the world.

Klöcker from Borken attended the show with seven employees and, moreover, additional personnel support from Italy, Indonesia and Taiwan. On a booth of about 70 m², Klöcker set the focus on communication, performance and innovation. The explicit goal of the exhibition for Klöcker was to realize two thirds of the global turnover with products being less than two years old as from 2008.

On one of the world’s newest and most demanding rapier weaving machines, Klöcker presented its electronically controlled leno devices made in Borken for the manufacturing of technical textiles. Furthermore, mechatronical components of the Klöcker product line secured the selvedges on the show’s fastest airjet weaving machine realizing 2007 picks per minute. The recently patented generation of K-MAG® Leno Healds which is used on almost every weaving machine optimized the production program.

”Klöcker is proud that all renowned manufacturers of weaving machines rely on original products from Borken and that even the many Chinese suppliers who lately have entered the market appreciate the extensive line of Klöcker products” the press release says. In order to realize the ambitious goals, the capacities at Klöcker’s main site in Borken will be enlarged. The necessary detail planning has been kicked off already. Early November 2007 at the latest, Klöcker will hand in a building application for a new production hall at the appropriate authorities.