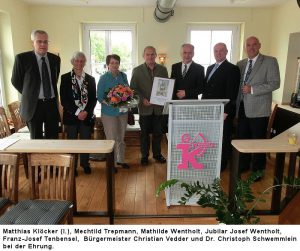 Südlohn. In the course of a particularly arranged ceremony in the pub “Autohof Weseke”, employees and management of Klöcker Bros. from Borken as well as the associated companies congratulated Josef Wentholt from Südlohn on 45 years of employment.

Wentholt started to work for Klöcker Bros. as mechanic in 1968 and went through the development of the traditional company from being a pure manufactory of weaving shuttles to getting an innovative industrial company.

Thus, Wentholt assisted Klöcker Bros. across generations also in difficult and turbulent times of change and additionally supported the company more than 20 years as works council.

In his speech, managing director Dr. Christoph Schwemmlein thanked Josef Wentholt for his exemplary cooperation and complimented the commitment of Wentholt which had considerably contributed to the success of the company.

As representatives of the communities, the mayor of Südlohn, Mr. Christian Vedder, as well as the local representative of the district Weseke, Mechthild Trepmann, also joined the congratulations of employees and management.

Franz-Josef Tenbensel as official representative of the Chamber of Industry and Commerce in Bocholt finally presented a certificate as a distinction for 45 years of employment to the citizen from Südlohn.