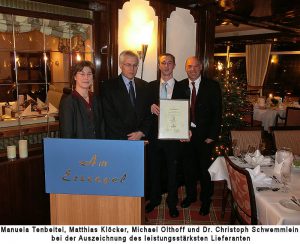 Borken. Once again, Klöcker Bros. took the occasion of this year’s Christmas party and thus the attendance of representatives of their national and international subsidiaries to pay tribute to outstanding merits within the scope of an individual ceremony in the restaurant of the hotel ”Am Erzengel” in Bocholt, Germany where the participating guests enjoyed culinary pleasures as well as first class service.

Management Assistant Mrs. Manuela Tenbeitel thus had the honour of awarding the present delegation of the company Dachcenter Weseke with this year’s price for the most efficient supplier.

During her laudation, Mrs. Tenbeitel emphasized among other things that the internal evaluation of suppliers, besides numbers, had to consider particularly those aspects which could not be confirmed – in purely statistical terms – exclusively by figures. Especially during difficult and turbulent times, it would be the more important to have a reliable and loyal business partner at one’s side who was actively committed, simply would be present whenever necessary and always did the utmost and everything possible to support the interests of the company, Mrs. Tenbeitel said in her speech.

On behalf of Mr. Bernhard Spöler, Mr. Michael Olthoff received the award for the most efficient supplier which Dachcenter Weseke would be pleased about and proud of, as it was subject to team spirit, Mr. Olthoff underlined in his following speech of thanks.

In a world increasingly being all about growing profits, Klöcker Bros. is proud of pausing in order to honour such extraordinary merits, particularly as not least the relevant virtues and the necessary trust considerably have been contributing to the success of the group of companies ever since.