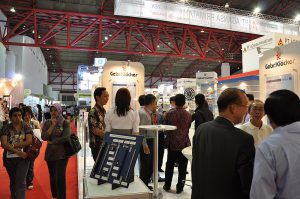 Weseke/Jakarta (pd). Klöcker Bros. and their subsidiary PT. SKD once again presented themselves at the textile show BANDUNG interTEX taking place every other year.

For the first time, the show was held in the extensive fairground “International Expo Kemayoran” in Jakarta. According to the company’s press release, the global crisis certainly has left its marks in Jakarta, an abundance of optimistic visitors gave reason to a more soothing thinking when it comes to the economic situation in Asia though. Klöcker and SKD welcomed numerous visitors from the weaving sector during the first days already and demonstrated their extensive product ranges. In total, 250 participants originating from more than 20 countries took part in this show and presented textile machinery as well as relevant accessories to around 12.000 visitors. Subsequent to this exhibition, Klöcker Bros. will continue their ambitious year of trade fairs at the Simatex in Buenos Aires and with the ATME in the mid of May before it will be completed with the shows ITMA Asia in Shanghai/China and with the Febratex in Blumenau/Brazil.