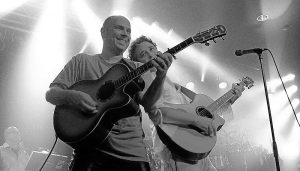 Weseke (pet). “Everybody who loves Genesis will like Still Collins”, the barkeeper of the Autohof in Weseke and organizer of this rock event Wilm Ringle promises. The third rock night will start at 08.00 p.m. on Saturday, November 14th.

The Lukassen Blues Band, a known constant in the regional music scene, will perform at 09.00 p.m. and kick off the evening. The main gig will be Still Collins – the best European Genesis and Phil Collins tribute band. “99 percent Phil Collins and Peter Gabriel”, Ringle guarantees.

According to the band’s self-portrayal, Sven Komp’s incredible voice sounds almost exactly like Phil Collins and amazes not only inveterate fans of the original. Still Collins’ repertoire ranges from the good old Genesis songs to the latest Phil Collins hits.

Since 1996, Still Collins rocks the boat around Germany’s former main capital Bonn. Five musicians support the lead singer Sven Komp and form the backbone of the entire show. Singer Meike Anlauff does not only take care of the background vocals but also accompanies Komp in “Separate Lives” and “Easy Lover”.

Still Collins promises nifty elements of surprise and an exciting show on stage or in the middle of the audience – it’s gonna be a thrilling show.

Tickets are available at the Autohof Weseke for twelve Euros or at the evening box-office for 15 Euros. To make sure nobody catches a cold the pavilion will be heated. Nobody will die of thirst either, Ringle promises “good Autohof standards”.