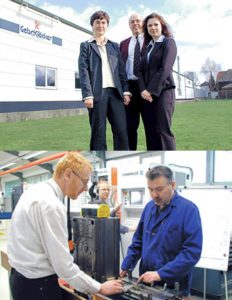 „We were running out of time“, Dr. Christoph Schwemmlein, co-partner and managing director of Klöcker Bros. says. The company from Borken-Weseke was about to move to Indonesia, since a necessary business enlargement was rejected. Now Klöcker sees new chances.

The reason for this is the decision of the planning committee of Borken to open another building plan procedure for the industrial zone of Weseke, Germany. The Higher Administrative Court of Münster had stopped the preceding plan due to various complaints of neighbors. “The expertise in terms of soundproofing was not sufficient for the judges”, Dr. Schwemmlein remembers. “Theoretically, we could have switched to retail industry at our site in Weseke” – going along with more traffic and a higher noise exposure for the neighbors.

All options exploited
Retail, however, is something the company which produces since more than 160 years at its site in Borken, could not care less about. Klöcker Bros. produce hightech tools and weaving machine accessories for the textile industry. The inventions of the Borkeners are in use in the entire textile world and help producing coatings for the wings of aircrafts and the spines of Harry Potter books. Exclusively highly qualified jobs have been created close to the Dutch border, further hiring is envisaged.

Full order books
The order books are full, and an expansion becomes absolutely necessary. “We need more space for production and a new R&D department” Schwemmlein explains. Since 2001, the company has been working on these plans. On a surface of about 13.000 m² with a total of five halls, Klöcker already has invested more than 1,5 million Euro into the upgrading of an existing production hall. Certainly, the area is not totally covered with buildings considering the property line, but according to applicable planning right, no more construction will be permitted in the short run: “We have exhausted all of our reserves here.”

Separated by a narrow road, about 9.000 m² additional space lend themselves for further investments. Injection moulding techniques and tool construction are to be extended for about two million Euro. Up to now, however, the company was not allowed to build on its own property. “Our nearby residents fear a higher exposure to traffic and emissions” Schwemmlein lists the concerns of his neighbors and, however, knows how to dispel these at the same time: “We significantly stay below all the critical values.”

Upon the Higher Administrative Court’s decision last year, he was about to give up though. The company either would have moved to Indonesia where all the work intense jobs are done, or it would have been sold going along with a relocation of the entire production.

New plan
Dr. Schwemmlein thanks all the politicians both in the board and in the district of Borken, as well as the chamber of commerce Nord Westfalen. “They kept talking at us not to throw in the towel”. Successfully: The new plan has been kicked off and probably will keep the Higher Administrative Court busy once again – “but it will withstand this time” the managing director of Klöcker Bros. knows. In 2009, he might have planning reliability, only one year later the expansion could be completed. Pretty much in the nick of time – “it almost was too late”

Klöcker is not the only case
According to the chamber of commerce Nord Westfalen, there are many cases being comparable with the one of Klöcker Bros. in Weseke. “Every now and then, the interests of industry and nearby residents need to be balanced out” the managing director of the chamber of commerce Mr. Hans-Bernd Felken states. Many times, the industry comes first while private living moves closer to the companies a lot later – which eventually might lead to difficulties.

Felken’s advice for companies is to always keep an eye on what is going on in their surroundings. If a development plan needs to be modified and a residential quarter grows towards existing industry, the chamber of commerce is the right contact partner. “We are officially involved in every planning procedure”, he underlines. Specialists of the chamber of commerce analyze on the spot whether there are conflicts coming up and can help to avoid problems from the first.