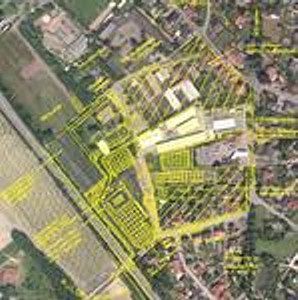 The environment planning committee quickly and unanimously agreed to the revised outlines for the extension of the industrial area near the federal road B 70 in Weseke. As a result, a new building plan procedure is being started.

The original plan has been dismissed by the higher administrative court.

Reasons: The interests of the residents have not been considered sufficiently. Subsequent proposals of the municipality to connect the future industrial area by a street along the school centre was rejected by the population of Weseke. The committee now favored the variation equally preferred by the administratives. The main feature is the development of a street leading from the street “Im Thomas” to the federal road B70, continuing right next to or rather below the same to finally end in the street “Salm-Horstmar-Straße” in front of the underpass. Due to this change, the industrial area does not need to be divided into parts making it more useful.

On the occasion of the citizens’ meeting in September 2006 Christoph Schwemmlein, Manager of Klöcker Bros., pointed out the importance of safety in view of the extension plans in order to create additional jobs. The municipality indicates the costs for development to be about 250.000,00 € taking into account the initially planned limit. Hubert Effkemann, responsible for city plannings, explained the “high protection level” for the residents. The edge parts of the area will be fixed as residential building area. Furthermore, there will be a new regulation before starting the industrial setting considering the proportion between noise and proximity to the residents. Each building application needs to be accompanied by a proof showing that the interests of the residents are sufficiently respected. A general rule: The nearer a company is moving towards the residents, the more seriously the noise level has to be taken. Hubert Börger (CDU), representative of Weseke, remarked that this solution is a real move towards the right direction, apart from the fact that the present junction will be cut, while technical town councillor Norbert Höving considers this point not to be relevant. A direct departure to Klöcker is no longer focus of the discussion. Certainly, a direct contact with the federal road B 70 would have removed the trucks from the residential area. Yet, this variation would have been much more expensive in the long run. In case of many accidents the city of Borken would have to bear the costs for two traffic lights. Of course, the citizens of Weseke can actively take part in the forthcoming proceedings with respect to the alternative plan.