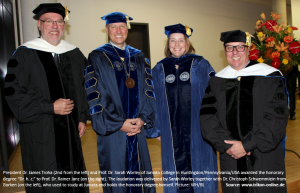 Prof. Dr. Rainer Janz of the Communications faculty of the University of Applied Sciences “Westfälische Hochschule” in Gelsenkirchen/Germany has been the commissioner for studying abroad in the Journalism and Public Relations department for almost twenty years now. He has built a strong and successful relationship with the Juniata College in Huntingdon, Pennsylvania, USA. In honor of his achievements for this cooperation, the college awarded him the honorary degree in January.

(BL) An honorary degree cannot be granted by mail or in five minutes. Therefore, the ceremony for awarding the honorary degree to Prof. Dr. Rainer Janz lasted more than two hours, during which greetings and short speeches lighted up Janz’s performance having led to this appreciation. Greetings were delivered by the Dean of the Computer Science and Communications department, Prof. Dr. Detlef Mansel, by the president of Juniata College, Dr. James Troha, by the head of the education department of the city of Gelsenkirchen, Annette Berg, and by the vice president of the North-Rhine Westphalian state parliament, Angela Freimuth. Short speeches delivered by Don Kirk, lecturer at the institution of Journalism and Public Relations, by Prof. Dr. Agung Nugroho, Dean at the catholic university Atma Jaya (Jakarta/Indonesia) and by Prof. Dr. Ben Gust of the Technical University Mittelhessen in Gießen/Germany and graduate of the Journalism and Public Relations course of study himself, revealed Janz’s performance in a worldwide network supporting the bilateral international mobility of both lecturers and students.

The speakers agreed on the support of the students in education and research being most important. International exchange broadens the students’ knowledge horizon and leads to a better decision-making basis at home and abroad. “Every cultural exchange helps working on a better future for the world”, the speakers basically expressed. It would be important to teach the students how to think, not what to think. That would be important for both sides: for German students who study abroad as well as for foreign students who make their way to the University of Applied Sciences “Westfälische Hochschule”. Prof. Dr. Rainer Janz carefully explored the world for his students and led them to staying abroad in Chile, Indonesia, Ireland, Romania, Spain and the USA.

For Rainer Janz, Juniata was a very special place and a very special college. He stressed his thanking speech accordingly: “The Juniata College is not only a place, but a place to learn and to live.” Juniata would be wonderful and for him it had been “love at first sight.”