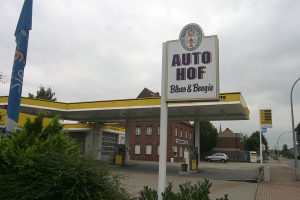 17 August 2010: Comeback of gas station in Weseke gets close

Weseke (pet). Quite soon, residents of Weseke will not have to go for miles anymore in order to get Premium and Diesel. The gas station in the street “Hauptstraße“ will be reactivated probably in fall. This has been announced by Dr. Christoph Schwemmlein, managing director of Klöcker Bros. being situated next-door.

The supplier of textile components purchased a plot of about 4000 square meters out of insolvency estate of the former owner in the street “Hauptstraße“. Apart from the gas station, the area is subject to a residential building, first floor of which accommodates the pub “Autohof“, as well as a repair shop situated behind fuel dispensers and car wash, which is currently used by a specialist for vintage cars. The purchase price was not specified by Schwemmlein.

Klöcker Bros. especially focusses on the partial area of approximately 2000 square meters being subject to the car workshop. “This surface completes our total area in an excellent way“, Schwemmlein points at the existent estate surrounding the new area in U-shape. This space which formerly had been stipulated for the enlargement will now provide a long-term reserve.

Klöcker has been bearing enlargement plannings for years already, but never got beyond declarations of intent. Connection and purchase of space had been provoking controversies in Weseke for years. “We are now in a much better position for building activities, not least due to the close connection to supplies“, says Schwemmlein.

Nevertheless, time will pass until a new production plant can be built. The hall must be pulled down, the polluted floor has to be cleared and the building permission subject to the enlargement must be redrafted. The former plannings could not be copied “one-to-one“ considering the new plot, the managing director explained. Furthermore, the current user of course should have found new facilities before the hall will be pulled down.

The gas station will not be operated by Klöcker Bros. itself, but is planned to be let for rent to the company Avia Klöcker from Borken. The conformity of names originates from overlappings in the family history dated back several generations. The gas station should be available within approximately three months, the new shop is scheduled to follow two months later.

Being the landlord, Klöcker Bros. wants to update “Autohof“. The music pub is planned to be reconstructed, the living space upstairs to be modernized.