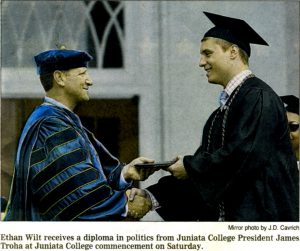 By Becca Milliron / For the Mirror

Not many students can say they’ve accidentally found themselves in their college president’s driveway. Christine Sumner, class president, found herself in this exact situation earlier this year.

“Right as I say turn around, President (James) Troha himself pulls out of the driveway,” Sumner said. “I was yelling at my parents to abort the mission.” James Troha, Juniata College President, got out of his car and chatted with Sumner and her parents.

“We are lucky to have professors who know us by name and invite us to dinner,” Sumner said. “We have different reasons we came, but something about this place stuck, and we’ll leave a piece of our heart here.”

Sumner was one of 351 students who graduated from Juniata College on Saturday. It was the school’s 137th commencement.

Three honorary doctors of humane letters degrees were given by Troha. James Lakso, former provost at Juniata College, was one of the recipients. Lakso acted in several roles such as professor, chairman of the economics department and academic dean of social sciences. He retired in 2013.

Christoph Schwemmlein, Klocker Bros. managing director, was presented the last honorary degree before addressing the graduates. “Be proud of today, but don’t forget about the people who guided you here,” Schwemmlein, a native of Borken, Germany said.

He noted that during his first semester at Juniata, Schwemmlein endured a hard transition to American life. However, faculty reached out and provided comfort. “After the adjustment phase, I had the time of my life here,” Schwemmlein said. “Juniata will always share your happiness and professional achievements.” ”Don’t take yourself too seriously. I still try to follow that,” Schwemmlein said.

Schwemmlein’s family was also celebrating the graduation of his son, Arnold. His other son, Achim is a freshman at Juniata.

Juniata College’s Chaplain, the Rev. L. David Witkovsky, ended the ceremony with the Benediction. “No matter if you either loved it here or hated it initially,” Witkovsky said. “Today, we can say, you made it.”